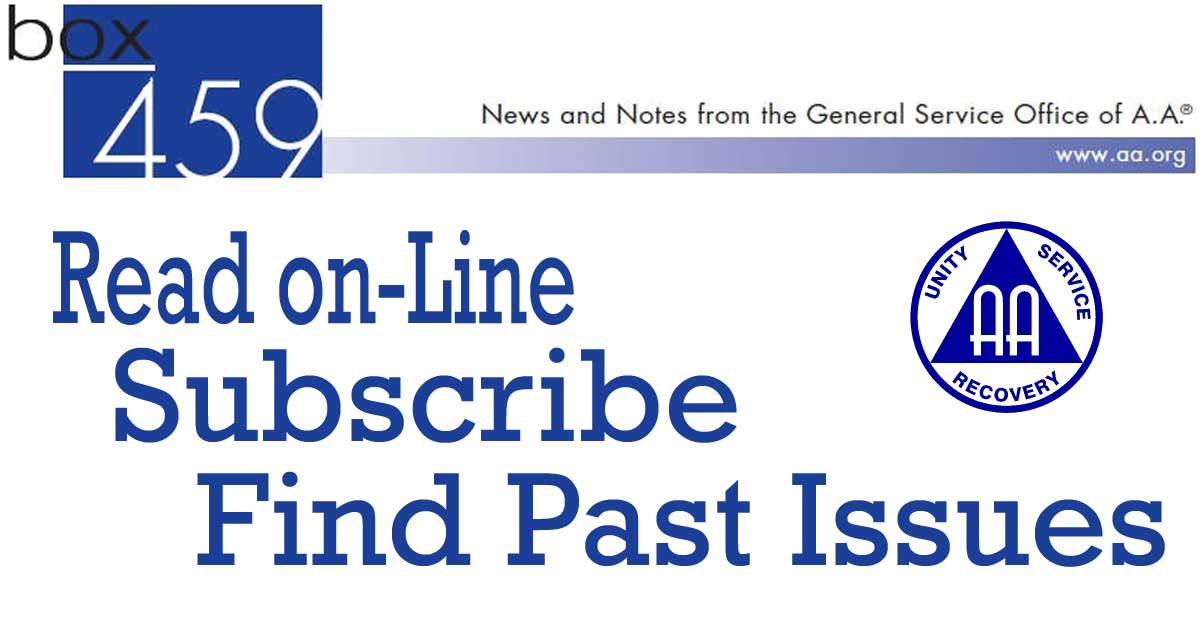 The ICOAA Seminar: Communicating a Shared Purpose
The very first Intergroup/Central Office/A.A.W.S./AAGV Seminar was held in September 1986 — with 98 representatives from 82 intergroups attending, plus three trustees from the General Service Board and 13 employees of G.S.O. and Grapevine.

What’s New at G.S.O. Celebrating Over Half a Millennium of Service
On September 29, there was a party at the General Service Office unlike any that had been held there before. To begin with, the festivities took place via video conference, with dozens of G.S.O. and Grapevine employees as well as members of the General Service Board attending. Read Full Issue On-Line Here

“A.A. at Its Best”: New Approaches to the Seventh Tradition
In mid-March of this year, at the onset of the Coronavirus pandemic, the lights went dark at the General Service Office as G.S.O.’s workforce dispersed to their homes to continue helping members carry the message of Alcoholics Anonymous. As the days went on, A.A.’s many central offices strove to remain open to fulfill their essential function, and A.A. groups turned to virtual platforms to ensure that alcoholics everywhere could meet and stay sober. Read Full Issue On-Line Here

Meeting Uncertainty with Resiliency: G.S.O. in the Pandemic
Given the toll that COVID-19 was already exacting on the New York metropolitan area, this announcement was not unexpected. Nonetheless, it was a first: never in the history of Alcoholics Anonymous had the General Service Office — whose antecedents stretch all the way back to the late 1930s and Bill W.’s small office at Honor Dealers in Newark, N.J. — been forced to shutter its doors. Read Full Issue On-Line Here

A Full Table: The Day of Sharing at G.S.O.
On December 3, 2019, the General Service Office of Alcoholics Anonymous hosted a historic Day of Sharing with members of seven other Twelve Step fellowships.

A Full Table: The Day of Sharing at G.S.O
On December 3, 2019, the General Service Office of Alcoholics Anonymous hosted a historic Day of Sharing with members of seven other Twelve Step fellowships. The gathering at A.A.’s upper Manhattan service office was not the first of its kind — the initial Day of Sharing took place in G.S.O.’s former location at 468 Park Avenue in 1991. There have been several subsequent ones attended by representatives of Al-Anon and the National Council on Alcoholism and Drug Dependence (NCADD), as well as a “Fellowship Day of Sharing” in 2008 that included attendees from Debtors Anonymous (D.A.), Overeaters Anonymous (O.A.) and Narcotics Anonymous (N.A.).

ASL Big Book Arrives Vol. 65, No. 4 / Winter 2019
Since the last American Sign Language Big Book and Twelve Steps and Twelve Traditions were produced over 15 years ago, members of the Fellowship who are Deaf have expressed to G.S.O. that it might be time to undertake a re-translation of both books to keep them up to date. The result is that the ASL Big Book DVD is now available.

The Meeting Guide App Vol. 65, No. 3 / Fall 2019
This is the first installment of a new Box 4-5-9 series on the technology that is changing the way Alcoholics Anonymous communicates to suffering alcoholics and interacts with its members.

Come Celebrate A.A.’s 85th Birthday in Detroit, Michigan Vol. 65, No. 2 / Summer 2019
It’s the perfect match — a resurgent and revitalized city of historic importance to Alcoholics Anonymous and an estimated 50,000 celebrating A.A.s from around the world.

Our Great Responsibility: Rediscovered Wisdom from A.A.’s Co-Founder Vol. 65, No. 1 / Spring 2019
During the course of 20 General Service Conferences, Bill W. gave more than 33 talks, 16 of which are now gathered in the new book Our Great Responsibility: A Selection of Bill W.’s General Service Conference Talks, 1951–1970, which is scheduled for publication in early May 2019.

The Only Requirement… Vol. 64, No. 4 / Winter 2018
The only requirement for A.A. membership is a desire to stop drinking. This is perhaps one of the most inclusive statements ever made by an organization — and one that is lifesaving for alcoholics caught in the deadly grip of their disease.